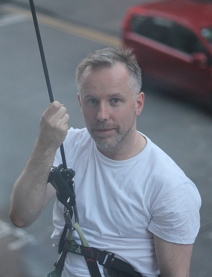 Shane started training in acrobatic gymnastics at the tender age of 25. From there he became heavily involved in Gymnastics for All (GFA) as a coach education tutor and went on to become the first National Development Officer with Gymnastics Ireland. He was GFA National Squad Director for two years, choreographing group displays, combining gymnastics, costume, music and lighting. Just last year Shane was an International Evaluator at the FIG World Gym for Life Challenge in South Africa.

Shane moved across into the World of Aerial about five years ago. In 2013/14, he attended the Ecole Nationale de Cirque in Montreal where he took their High Performance Teacher Training Programme, specialising in Hand to Hand, Doubles Trapeze, Russian Bar, Banquine and Aerials. In the past year he started his company, TAKING FLIGHT aerial & acrobatics, specialising in the teaching of aerial and acrobatics in his own studio in Dublin city centre. He also teaches with APPA-NI, Belfast and facilitates workshops nationwide and internationally. In recent years, Shane led a Secondary Schools Aerial Project, bringing schools and aerial artists together. He has been a teacher at the Irish Aerial Dance Festival for the past five years. 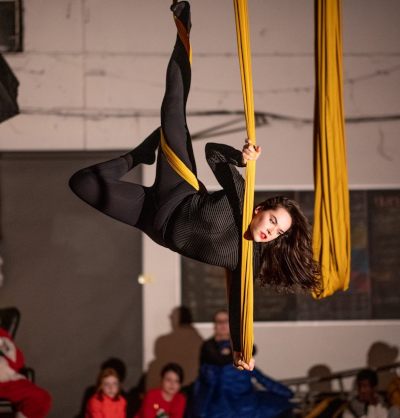 Hannah is happiest twirling at warp speed in a hammock, but trains and teaches a range of skills across rope, harness, wall running, counterweight, spiral, as well as dance, flying, and static trapeze. Her background in science means she particularly enjoys breaking down the mechanics of aerial and generally geeking out about physics. She has performed as part of Culture Night, the Create Project, IACC’s Creative Intensive, been featured in Totally Dublin magazine, and in 2019 she graduated with Ecole Nationale de Cirque, Montreal, in Circus Instruction. When she isn’t spinning, she is an illustrator, and is likely covered in paint at any given time.

Luci has been hooked on aerials since her first class (2014) in her hometown Florianópolis, Brazil. And she has been training in Taking Flight since 2015. She loves flying, as well as movement and dance. She specialises in trapeze and vertical dance (harness wall running). Her experience includes research and performance: Culture night (2018); CREATE project (2020); Kids Show development (2020). Luci has also done acrobatics level 1 coaching course (2020). 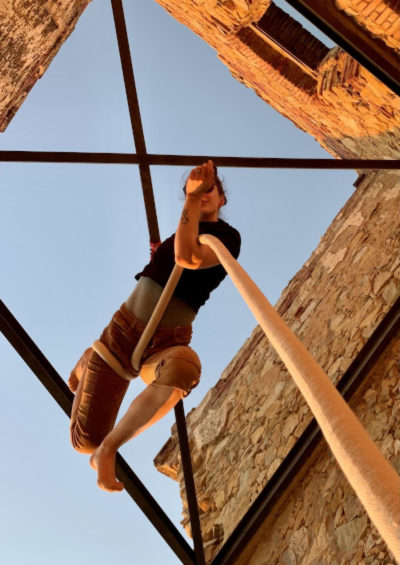 Monika is an aerial artist and mentor specialising in fabric and rope, durational performance and choreography. She is influenced by her upbringing in the mountains and forests of Slovakia where she spent countless hours walking, running and climbing, and built her endurance. She attended a four-month long, full-time professional course in London where she trained in aerial rope, fabric, straps and flexibility extensively. She has since trained in Barcelona on multiple occasions in order to extend her knowledge of dynamic skills on aerial rope. She currently resides at Taking Flight where she trains and develops her work. Monika believes aerial arts have a lot to offer to everyone who is interested in movement, regardless of age, ability and level of experience. As a teacher she strives to share her knowledge and experience, create an inclusive and fun atmosphere and help students of all levels reach their aerial goals. 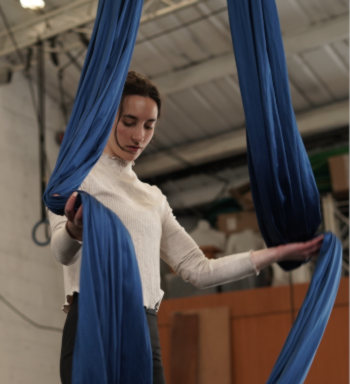 Sean is an aerial artist, focusing on rope and silks, but will dabble in any movement from hand-balancing to flying trapeze, surfing and yoga. She first discovered aerial 5 years ago and was so inspired she moved to Barcelona for a year to train in circus full-time. She then returned to Dublin to continue her learnings and develop her own style, and was lucky to have the opportunity to learn how to teach circus in the National Circus School in Montreal. She has been very lucky to learn from incredible mentors all over and enjoys nothing more than breaking down techniques and movements. She has a particular love for dynamic and momentum based movement, and when not in Taking Flight loves to eat cereal, hike and swim. 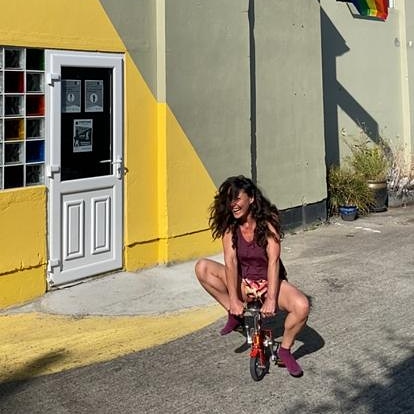 Susie McDonagh was born and reared in Dublin, although It was during her time in the UK that she was introduced to the circus arts. That was almost 20 years ago. Since then she has honed her circus skills in multi-disciplines through courses, workshops, masterclasses, bootcamps, weekly classes and tutoring. Susie Specialises in aerial rope, although she dabbles in trapeze, straps, fabric, hoop, cocoon, clowning, object manipulation and floor acrobatics. She became a qualified circus arts instructor in 2019 graduating with Ecole Nationale De Cirque, Montreal. This followed on from successfully completing the teacher training program with Serenity Smith Forchion of Nimble Arts. Susie’s heart lies within the circus community and especially within Taking Flight. She continues to promote, cultivate, endorse, and practice circus skills with every opportunity. 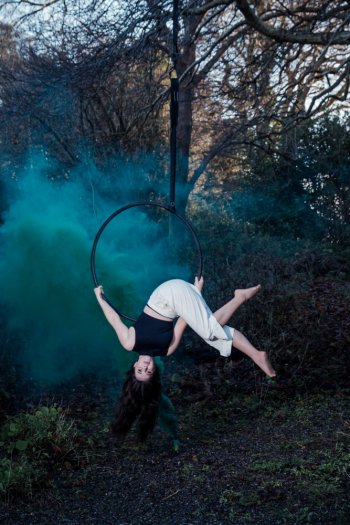 Claire is an aerial hoop artist and instructor who started her artistic journey back in 2007 in Bull Alley’s Theatre Training College. It was there that she found her love of creative exploration and being on stage.

After an extended career break from performing, Claire found herself falling in love with a big metal circle. Bitten by the aerial bug in early 2018, Claire decided to take up space in every aerial studio in the greater Dublin area. You can now find Claire, happily dangling from the ceiling in Taking Flight, thinking of new ways to add to her collection of hoop bruises. 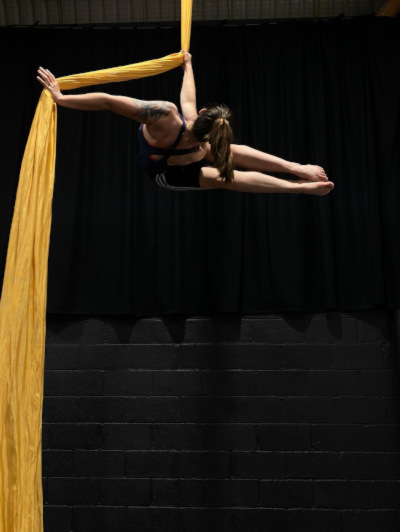 Kate is an aerialist, artist and teacher with a love of performance. She discovered aerial in 2014 when she saw her first show ‘Landfall’ by Ether Productions and hasn’t looked back since! Silks are her main love but she also dabbles in doubles, contemporary dance and as many other aerial apparatuses as she can. Kate has performed at multiple venues and festivals throughout the country. Her aerial practice is informed by her education in the National College of Art and Design, and particularly it is the potential combination of expressive movement with elements of visual art that inspire and motivate her training. Most recently she has been creating multidisciplinary shows with Aduantas aerial company and working in social circus projects. 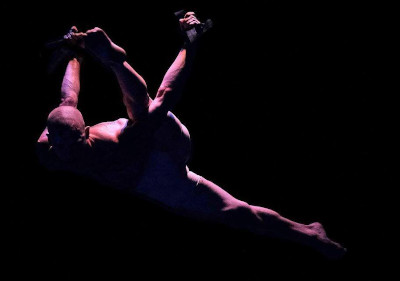 Sasha is a Dublin based performer, who is specialised in Hand Balancing, Aerial Straps & Dance. He is a self-taught artist who lived in London, Glasgow, Marrakesh, Berlin and other places too numerous to mention. He had the honour to perform & collaborate with companies such as German National Theater, 45 Degrees, Tempodrom Berlin, TEDx, Nick Knight, Beats Headphones and many more. In 2019 Sasha premiered his solo show “Public Nightmares to Private Dreams” at the Berlin Pfefferberg Theater. He's been working 10 years actively on stage, including 8 years of teaching Straps, Hand Balancing and workshops on floor movement & physical theatre.